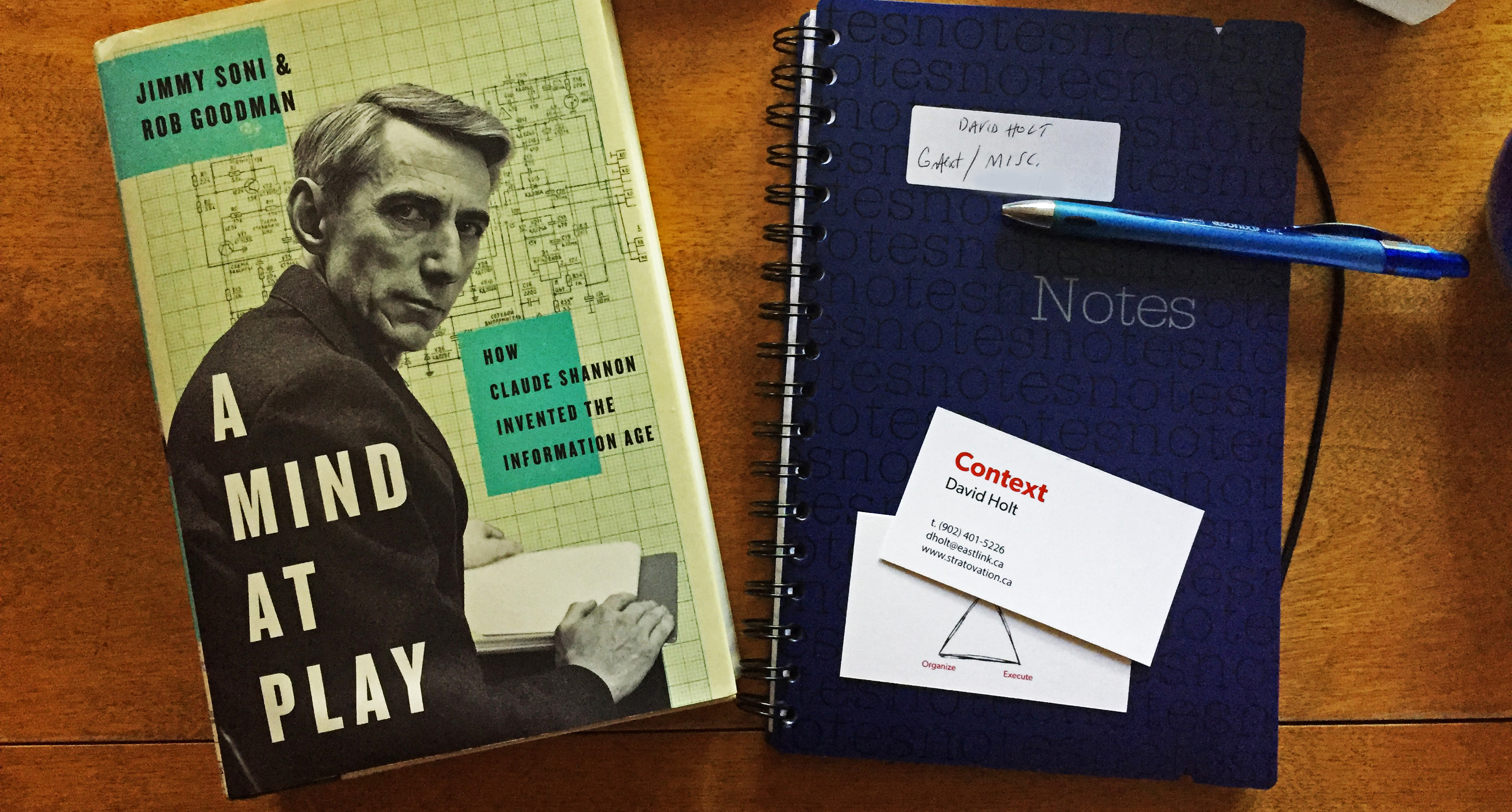 Elite mathematicians are as creative as painters and entrepreneurs. Maybe more so.

It’s a small sample, but the brilliant people I know and have known share two underappreciated traits: a sense of humor and a quirky passion for following their curiosity, no matter what. These two qualities can get you into a lot of trouble.

The most interesting people, too, have their own unique motivations and their own ways of slicing and dicing what interests them. Put them into the usual mold, and they will probably break.

The article below, by the authors of the new book A Mind at Play: How Claude Shannon Invented the Information Age, touches on both qualities.

Shannon was a mathematician and puzzle solver who proved theorems and built gadgets with the same combination of passion and precision. His concept of information was the elusive quantity that lies behind the entire digital age. It was similar to that of entropy, at least mathematically, and he called his home Entropy House, a metaphor any homeowner can appreciate.

I used to visit Entropy House in the 1970s and ’80s and recall the eccentric unicycle and the bald patch of grass where Shannon practiced juggling.

His hobbies tended to combine a sense of play, some physical challenges and — often but not always — a deeper theoretical insight. He built gadgets that were both amusing and instructive. One was a machine that turned itself off.

He made a machine that solved the Rubik’s Cube and wrote a funny poem about the elusive device. He built Theseus the mechanical mouse, which, along with its maze, was considered the first practical demonstration of artificial intelligence.

After building several scale models, he turned a small school bus into an elaborate camper van. He played the clarinet and loved Dixieland Jazz.

He investigated the mathematics of the stock market but made more money by investing in a few tech companies. Hanging out in casinos, he co-invented the first wearable computer.

Back at Entropy House, the rule was you paid attention to something because your were curious about it. Not because it was practical or promised some conventional reward like financial gain, although could ensue later on.

This something could be a puzzle, a scientific mystery, a technical or physical challenge, the draft of a poem, or a gadget to build or fix. Tools included unicycles, juggling balls and clubs, Erector Sets, mechanical devices of all kinds, musical instruments, computers both analog and digital, mathematics, chess sets, frisbees, books – and, well, tools.

Shannon was known for a killer intuition, paring away a problem to get at its essence, then building it up again. This could irritate brilliant people who didn’t have the knack.

His many interests and hobbies cross-fertilized each other. Procrastination was a way to avoid the quick but simplistic solution. He would spend years on a difficult problem. When he had solved it to his satisfaction, he moved on.

Reclusive and not career oriented by normal standards, Shannon was employed by Bell Labs, MIT and the US government, with stops at the Princeton Institute for Advanced Study and Stanford.

During WW II he put cryptography on a mathematical footing and did research that led to his ground breaking work on what was to become known as information theory.

At Bell Labs he sometimes got in trouble for unicycling and juggling – at the same time – but as senior researcher and respected all-purpose genius, he got away with it.

Not only did he juggle, but he also came up with a mathematical theory of juggling. This is interesting partly because many math types have juggled over the generations, but he was the first one to deconstruct the practice.

At Bell Labs he preferred to hang out with the guys at the machine shop while other theoreticians wondered why he was so fascinated with gadgets. He liked to build things with his own hands, but wasn’t above hiring others to help.

Shannon combined his passions for machines and chess in early research into what we now call artificial intelligence, but at the time it seemed more like a sidetrack.

He rarely collaborated. The “bit” was his idea, but he asked his buddies to come up with a word for it.

He loved games of all kinds and although he described himself as a frail man, he was athletic. He loved music, Alice in Wonderland and the sounds of words.

In recent years several books have brought a new prominence to this shy scientist and inventor. A film is coming soon.

There is no Nobel for the fields in which he worked — math, engineering and computer science — so it was fitting that he won the first Kyoto Prize.

His work was often decades ahead of its time.

When asked if machines would ever be able to think, he replied: “Well, I’m a machine and you’re a machine and we both think, don’t we?” [I think I got that right.]

He was friends with Alan Turing and spent time with John Von Neumann. His mentor at MIT was Vannevar Bush, the practical academic who invented modern science policy, fostering research into atomic weapons during the war and the Internet in peacetime. Our modern tech billionaires owe a lot to Bush, but not all of them know it.

Entropy House had a great vibe. It was a sort of Disney Land for talented people who didn’t take themselves too seriously.

His wife Betty was a collaborator. She was also a math whiz, a reader, a puzzle solver and a master weaver. She bought him his first Erector Set. The next generation is talented too.

With all his technical and scientific achievements, I asked what Claude Shannon was most proud of. “Lasting 42 moves with the world chess champion,” replied a family member.

From the article below:

Reflecting on the arc of his career, Shannon confessed, “I don’t think I was ever motivated by the notion of winning prizes, although I have a couple of dozen of them in the other room. I was more motivated by curiosity. Never by the desire for financial gain. I just wondered how things were put together. Or what laws or rules govern a situation, or if there are theorems about what one can’t or can do. Mainly because I wanted to know myself.”